User warning: The following module is missing from the file system: advanced_help. For information about how to fix this, see the documentation page. in _drupal_trigger_error_with_delayed_logging() (line 1156 of /home/cityside/public_html/includes/bootstrap.inc).

As we commemorate Good Friday we are going to draw on Salvador Dalí’s famous painting “Christ of St John of the Cross”. This is an iconic image of the cross that has drawn both praise and ire from Art Critics. Some find it kitsch and unremarkable, formulaic and sophomoric—one described it as banal. Others find it intriguing and mesmerising, in 2006 it won a poll as Scotland’s favourite painting as it hangs at Kelvingrove Art Gallery and Museum, Glasgow, Scotland.

The germination of this painting came from two sources. Here’s what Dalí says:

“In the first place, I had a ‘cosmic dream’ in which I saw this image in colour and which in my dream represented the ‘nucleus of the atom.’ This nucleus later took on a metaphysical sense; I considered it ‘the very unity of the universe’, the Christ!”

This is represented by the image on the TV. After the two atom bombs were dropped on Hiroshima and Nagasaki in World War II, Dalí struggled with the idea of living under the shadow of potential nuclear holocaust. He developed an interest in nuclear science, particularly the work of Heisenberg. He began to see how fundamental atomic energy was to existence and as he was also renewing his interest in the church, he saw mysticism as providing the energy for faith. He developed what he called nuclear mysticism.

And this diagram on the left was what came to him in the dream. He then simplified it in the triangle and circle on the right. You can see the structure of his painting emerging. By imposing the Christ over this atomic structure Dalí felt he had captured an image of “the very unity of the universe.” It is worth for a moment pausing to consider what this means as we look at the painting.

They took Jesus to Pilate’s headquarters. It was early in the morning. So Pilate went out to them and said, “What accusation do you bring against this man?” They answered, “If this man were not a criminal, we would not have handed him over to you.” Pilate said to them, “Take him yourselves and judge him according to your law.” The Jews replied, “We are not permitted to put anyone to death.”

Then Pilate entered the headquarters again, summoned Jesus, and asked him, “Are you the King of the Jews?”

Jesus answered, “Do you ask this on your own, or did others tell you about me?”

Pilate replied, “I am not a Jew, am I? Your own nation and the chief priests have handed you over to me. What have you done?”

Pilate asked him, “So you are a king?”

Jesus answered, “You say that I am a king. For this I was born, and for this I came into the world, to testify to the truth. Everyone who belongs to the truth listens to my voice.”

Pilate asked him, “What is truth?”

After he had said this, he went out to the Jews again and told them, “I find no case against him. But you have a custom that I release someone for you at the Passover. Do you want me to release for you the King of the Jews?”

They shouted in reply, “Not this man, but Barabbas!” Barabbas was a bandit.

The second inspiration for the painting came from a drawing by St John of the Cross who lived around 500 years ago. He is said to have had a vision of the crucified Jesus and immediately drawn it after. A couple of things to note: This is the only known drawing that he did and the perspective of looking down on the Christ from above is a massive departure from the conventional depictions of Jesus on the cross. Dalí took inspiration from this and wrestled with it until he found this perspective here, that works so well when imposed over his simplified image of the nucleus of an atom.

One last comment on the development of the painting. Dalí found the conventional depictions of the crucifixion overemphased the horror and grotesqueness of the event. The idea of appealing to such base emotions to enable connection with this event was something that he wanted to challenge.

He was particularly critical of Matthias Grünewald’s altarpiece in Isenheim saying it was “materialistic and savagely antimystical.” In response Dalí set out to portray “the most beauty and joy of anything anyone has painted up to the present day.” 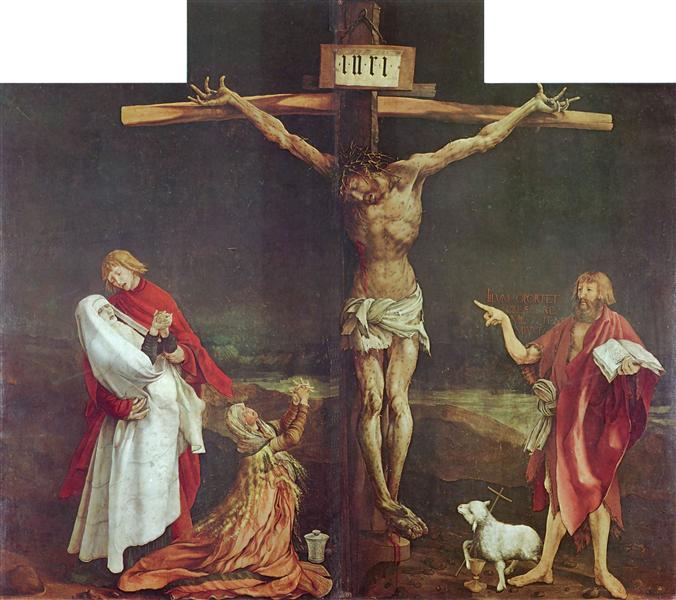 As a result, Dalí went to Hollywood to find the perfect model and came across stunt-man Russell Saunders. He strapped Saunders to a gantry so he could see the effect of gravity on his body. He also employed an architectural consultant to determine the perspective of the cross and how it interacts with the landscape.

There are no nails, scars or even a crown of thorns. As St Catherine of Siena says the Christ is held to the “cross by love and not by nails.” The majesty of the Christ, the archetypal form of a God is expressed against the backdrop of all the other depictions of this moment, undamaged by human hand, unhindered by the human spirit. This Christ, while still crucified, transcends this earthly appreciation and elevates us to heaven, both in the movement of the cross and the light that it seems to be drawn to.

Then Pilate took Jesus and had him flogged. And the soldiers wove a crown of thorns and put it on his head, and they dressed him in a purple robe. They kept coming up to him, saying, “Hail, King of the Jews!” and striking him on the face.

Pilate went out again and said to them, “Look, I am bringing him out to you to let you know that I find no case against him.”

So Jesus came out, wearing the crown of thorns and the purple robe. Pilate said to them, “Here is the man!”

When the chief priests and the police saw him, they shouted, “Crucify him! Crucify him!”

Pilate said to them, “Take him yourselves and crucify him; I find no case against him.”

The painting breaks the rules of conventional structure and leaves the viewer at a loss as to where they are positioned in relation to it. Somehow though, it resolves itself and rather than shutting people out, it draws them in—but to what and where? We view this Christ from the unconventional angle of looking down the shaft of the cross and we end up sharing the view

that the Christ has on the world, looking down to the bottom of the cross and then to the bay below. In the clouds we see some unusual shapes, shafts of light maybe that echo the foot of the cross and tie the abstract image to the scene below. It’s as though the Christ is soaring above creation but still cosmically affecting it. It’s almost as if when our gaze drifts downwards, these shapes in the clouds bounce us back up to the cross.

The three figures on the waterfront are simply going about their business with a relaxed demeanour, seemingly oblivious to the cosmic event above them. They are echoes of the call of the disciples at the beginning of the Gospels, or perhaps they show the sad return to their nets post crucifixion. Two of the figures are actually images appropriated from a painting by Le Nain and a sketch by Velazquez of whom Dalí described as being the only artist to paint a noble human. Complimenting the perfect Christ, is a perfect creation.

The mundaneness of the beach scene is a sharp juxtaposition with the cosmic nature of the Christ above. The scene almost seems to ask “so this is what it was for?” but it bites its tongue and instead makes a statement. “This is what is was for.”

So they took Jesus; and carrying the cross by himself, he went out to Golgotha. There they crucified him, and with him two others, one on either side, with Jesus between them.

Pilate also had an inscription written and put on the cross. It read, “Jesus of Nazareth, the King of the Jews.” Many of the Jews read this inscription, because the place where Jesus was crucified was near the city; and it was written in Hebrew, in Latin, and in Greek.

When the soldiers had crucified Jesus, they took his clothes and divided them into four parts, one for each soldier…

After this, when Jesus knew that all was now finished, he said, “I am thirsty.” A jar full of sour wine was standing there. So they put a sponge full of the wine on a branch of hyssop and held it to his mouth. When Jesus had received the wine, he said…

Let us take a pause in time, just as the Christ in the painting. Let’s expand the intake of breath before Jesus speaks his last words. Let’s draw out this moment and participate in that breath.

I invite you to participate in the three stations around the room.

At the pool:
Draw your sin in the water. Float a flower as a symbol of your own death to self.

Communion:
Take communion and dip your bread in the wine. You may want to sip some vinegar instead of wine.

At the sketchpads
Draw your own version of the crucifixion.

“It is finished.” Then he bowed his head and gave up his spirit.”

You are free to stay or go,
there is no blessing for “it is night”.
Be like Nicodemus and slip away into the night,
confronted by the Christ,
and into the unknown of what this all might mean.